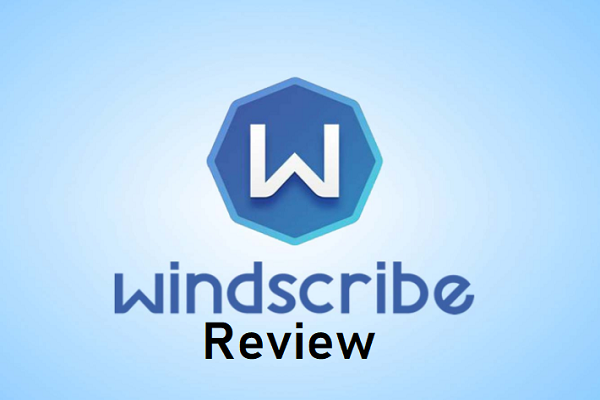 Although Windscribe VPN is a pretty good option, yet it doesn’t beat its competitors like NordVPN that offers increased numbers of servers, double encryption, live support and cheap pricing.

If you’re someone who is a beginner in the VPN industry, Windscribe is a VPN service that packs serious features while being 100% transparent about operations.

VPN services and transparency didn’t go hand in hand but Windscribe offers you a refreshing mix. Let’s take a look at the detailed review of this VPN provider.

A quick summary of Windscribe VPN

Windscribe is a company based in Canada and it offers a great alternative for America-based customers. It provides you with a free VPN plan with 10GB bandwidth in a month along with other pivotal plans.

They offer 256-bit AES encryption and the standard OpenVPN tunneling protocol. Their prime option is pretty quick and it offers a plethora of tools.

Can you trust Windscribe VPN with your confidential data?

Once you go through the privacy policy of Windscribe, you’ll simply love it as they have it written in simple language for all to understand. In fact, they’re great at dispelling concerns that any customer may ever have.

As already mentioned above, Windscribe is a company that runs out of Canada and hence they are subject to Five Eyes online surveillance program. There have been several reports that have revealed that the CSIS has been collecting online data secretly from netizens.

Nevertheless, ISPs (and not VPNs) in Canada don’t have power to retain the logs of their users. They are bound to comply with anti-piracy legislation that results from Bill C-11. Now, you have to understand that a VPN is not an ISP.

If the government wanted details from a VPN company, they couldn’t get it unless they passed a brand new law. In case a Canadian-based VPN maintains logs on their clients, the Canadian authorities could try to extract data from the service.

In order to be fair, nations like Russia and China are not a part of the Five Eyes Alliance and hence they would pose to be of greater threat as long as stealing information is concerned. It’s just proper to have all sorts of facts at your disposal. You should also know that this VPN provider denies this being a sort of issue for the users

You can’t forget that Canada also has stringent copyright laws. This is something that you can consider if you’re using VPN for torrenting.

This is where you can definitely trust this VPN firm. When a company doesn’t offer any logged data from the customers, the government can’t snatch away the data from them.

Windscribe also has a detailed explanation as to how their logging policy works and the things that they do behind the scenes. Users have always loved them for being upfront and transparent about whatever they do.

Yet another advantage of this company is the fact that they let users use the service on unlimited numbers of devices.

Pricing and plans of Windscribe VPN

This is definitely a great deal and Windscribe would ask you to sign up for getting these plans. The price is totally at par with what you would have to pay for other VPN services.

Windscribe also has an option called Build a Plan where you’re allowed to add one location for $1/month. When you’re sure about where exactly you would need to connect, this could be a favorable game-changer. The 4 things that separate free VPN of Windscribe from other paid service are.

How many devices can be connected to one account?

Regardless of whether you’re using the paid or free service, you always have the capability of connecting unlimited number of devices to your VPN by utilizing a single account. This feature is unique to Windscribe and most of the VPN services will let you use 5 or less than 5 connections at the same time.

If you have a small business or a large family, Windscribe is the ideal option for you. With only one account, too many people can benefit from the service.

They don’t share your VPN credentials with the others. However, they investigate accounts that are connected to a large number of devices at a time.

So, it can be clearly said that Windscribe VPN offers a lot to its users. As they also have a separate server for users to connect to Netflix, this is a big thing for people who live overseas. The support page seems great and you can definitely go for it.